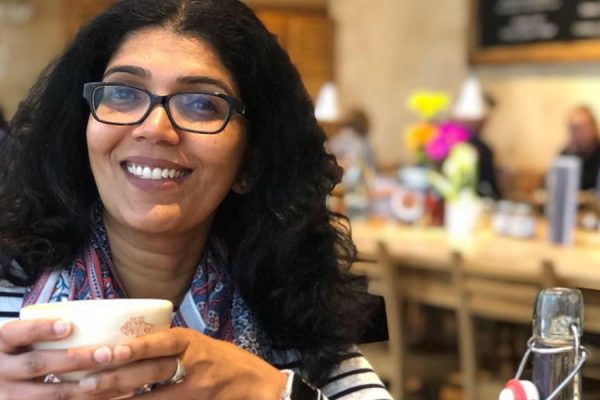 Jyothi Myneni, born in India, came to the United States 26 years ago. A bright woman and pioneer in a field of study historically dominated by men, Jyothi received her Bachelor’s Degree in Electrical Engineering from the Birla Institute of Technology & Science, Piliani, and her Master’s Degree in Computer Science from the New Jersey Institute of Technology. Jyothi then embarked upon a career in information technology, working as a senior manager for AT&T labs for nearly 21 years. While in the lab, Jyothi was involved in many cutting edge projects, development of home-grown apps, prototypes and new solutions.

While balancing work and home life, Jyothi began seeing double, literally – becoming a Mother to twin boys. Recognizing that life is short, time moves quickly, and quality time is fleeting, Jyothi decided to leave her employ at AT&T when her sons were in 7th grade, opting to stay home, and immerse herself in her boys’ lives.

While Jyothi can be found reading books, driving her boys to and from competitive basketball tournaments, and binge watching Netflix, she continues to follow her passion for learning.
Told you she is super smart.

Jyothi began brainstorming ideas for developing decentralized applications for blockchain. While attending the Oxford Blockchain Strategy Programme, Jyothi was fascinated by the segments presented by Craig Sproule, on Crowd Machine. Intrigued, and despite the fact that she had a full complement of coding languages in her back pocket, Jyothi joined Crowd Academy to learn how to build apps using Crowd Machine’s no-code technology.

Upon entering Crowd Academy, Jyothi found herself “blown away” by the User Interface and the complex made simple through drag and drop. “I love the Rules portion” Jyothi disclosed, adding she had been tasked with building a like product, in a previous role. “The range of operations blew me away. Your Rules are so comprehensive yet the UI so intuitive, whoever designed it is a genius!”

Knowing first hand the amount of work it takes to develop an application using traditional coding methods Jyothi felt that newbies to No Code might not grasp just how much time can be saved in development using Crowd Machine. She totally nailed it in describing the “true advantage of Crowd Machine” as being that the “team can be one person instead of several people working on differing elements of an application,” giving a further two-thumbs up to Crowd Machine for being a one-stop shop for development AND deployment “Crowd Machine takes care of everything.”

Jyothi completed the Academy in just one month, scoring a basket in our top 10 Digital Disruptors: People to Watch in 2019. In three words, Jyothi describes Crowd Academy, as “awestruck, fascinating & fun”.

Jyothi is currently researching the development of a peer2peer transaction system using blockchain technology whereby parties are able to enter agreements directly, disintermediating third parties. Keep an eye on Kontract Inc! Jyothi is also the President and CEO of RadGov, Inc., a company that specializes in building solutions for the Government sectors.