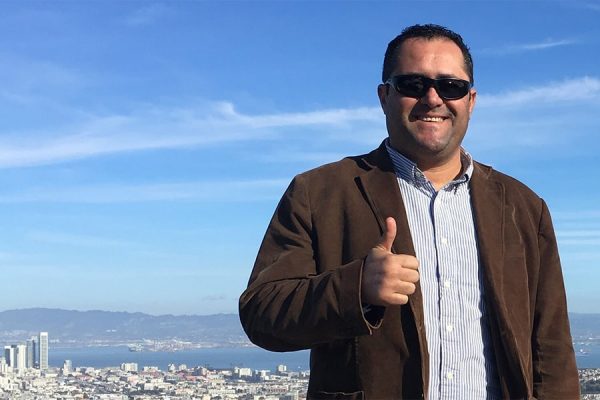 Andy Tunisi was born in a military hospital in Saudi Arabia.   His father was a Brigadier General in the Saudi Armed Forces before he retired.  In 1991, Andy moved to the United States for a little over a decade. During his time in the States, Andy  attended the Florida Institute of Technology, where he studied all things Computer Engineering.   In fact, Andy earned his Bachelor’s Degree, Master’s Degree, and Ph.D., all in Computer Engineering.   Despite no shortage of initials following his name, Dr. Tunisi turned his sights on earning an MBA from Texas A & M University.  Why stop there, Andy didn’t – add CBE, Certified BlockChain Expert, and most recently, “in his spare time”, Andy became a certified Crowd Machine Developer, claiming ground in our top 10 Digital Disruptors:  People To Watch in 2019.

Clearly his passion, Andy radiates utter enthusiasm while talking tech,  particularly technologies related to blockchain, crypto currencies, AI and IoT.   It was the Blockchain Expo in Santa Clara, California that introduced Andy to Crowd Machine’s Craig Sproule and Crowd Academy.  As Andy explains, “computer engineering really deals with hardware most of the time, not programming.” Andy felt that coding could be the key to unlocking problems, but required too much time – until Crowd Academy.

Andy’s first impression of Crowd Academy was, “too good to be true,” having never been a fan of code because “programming requires so much patience and memorization.”  Despite working full time, Andy accelerated rapidly through Bases 1-6, which he felt, provided the “basic building blocks” and, in Base 7, “you put it all together.”

Summarizing Crowd Academy in 3 words, Andy says “ Must Have Skills.”

Recognizing its inherent value,  the Dr. emphatically recommends Crowd Machine  to colleagues and clients, encouraging them to get certified.   “Crowd Machine is leading rapid application development in the right direction, specifically, use LOGIC, not code.”  If you “add AI to the picture, wow.” As an active Crowd Academy alumnus, Andy plans on organizing “MeetUps” to share knowledge and information relating to no-code rapid application development, blockchain, AI, IoT  & the crypto economy.

Andy is enthusiastic about partnering with Crowd Machine to  introduce new and innovative blockchain technologies to the marketplace.  He has already been instrumental in the Research and Development of significant emerging Blockchain and Crypto technologies.  For example, Andy achieved an ICO launch for CareX tokens – CareX is a Healthcare Marketplace on the Blockchain that increases trust, transparency and affordability for consumers and healthcare.  Also, Andy, along with FEMA, DHS & PVTAM worked on developing a product based on blockchain technology to handle the cycle of disaster management, including preparation, mitigation, response and recovery.

Andy is currently back in Saudi Arabia working for the Saudi Telecom Company, the  backbone of communications in the country, where he is collaborating on a large scale blockchain project.  Andy does plan on returning to the U.S., specifically to his home in Houston, Texas where his wife, Naimah and four children (ages 9-25) reside.